Imagine there is a power that lies hidden at the very heart of God’s people. Suppose this capacity was built into the originating “stem cell” of the church by the Holy Spirit but was somehow buried and lost through centuries of neglect and disuse.

Imagine that if rediscovered, this hidden power could unleash remarkable energies that could propel Christianity well into the twenty-second century—a missional equivalent to unlocking the power of the atom.

Is this not something that we who love God, his people, and his cause would give just about anything to recover? I now believe that the idea of latent, inbuilt missional potencies is not a mere fantasy; in fact, I wholly believe that there are primal forces that lie latent in every Jesus community and in every true believer.

Imagine there is a power that lies hidden at the very heart of God’s people.

Not only does such a phenomenon exist, but it is actively demonstrated in history’s most remarkable Jesus movements. Perhaps the most remarkable expression of it is very much with us today.

The fact that you have started reading this article means that you are not only interested in the search for a more authentic expression of ecclesia (the New Testament word for church), but you are also in some sense aware of the seismic changes in worldview that have been taking place in general culture over the past fifty years or so.

Whatever one may call it, this shift from the modern to the postmodern, or from solid modernity to liquid modernity, has generally been difficult for the church to accept. We find ourselves lost in a perplexing global jungle where our well-used cultural and theological maps don’t seem to work anymore. We may feel as if we have woken up to find ourselves in contact with a strange and unexpected reality that seems to defy our usual ways of dealing with issues of the church and its mission.

All of this amounts to a kind of ecclesial future shock, where we are left wandering in a world we can’t recognize anymore. In the struggle to grasp our new reality, churches and church leaders have become painfully aware that our inherited concepts, our language, and indeed our whole way of thinking are inadequate to describe what is going on both in and around us.

The problems raised in such a situation are not merely intellectual but together amount to an intense spiritual, emotional, and existential crisis. The truth is that the twenty-first century is turning out to be a highly complex phenomenon where terrorism, disruptive technological innovation, environmental crisis, rampant consumerism, discontinuous change, and perilous ideologies confront us at every point.

In the face of this upheaval, even the most confident among us would have to admit, in our more honest moments, that the church as we know it faces a very significant adaptive challenge. The overwhelming majority of church leaders today report that they feel it is getting much harder for their communities to negotiate the increasing complexities in which they find themselves.

The church is on a massive, long-trended decline in the West.

In this situation, we have to ask ourselves probing questions: Will more of the same do the trick? Do we have the inherited resources to deal with this situation? Can we simply rework the tried and true Christendom understanding of church that we so love and understand and finally, in some ultimate tweak of the system, come up with the long-sought winning formula?

In a time of drastic change it is the learners who inherit the future. The learned usually find themselves equipped to live in a world that no longer exists. —Eric Hoffer, Reflections in the Human Condition

In a time of drastic change it is the learners who inherit the future.

I have to confess that I do not think that the inherited formulas will work anymore. I know I am not alone in this. There is a massive roaming of the mind going on in our day as the search for alternatives heats up. However, most of the new thinking as it relates to the future of Christianity in the West only highlights our dilemma and generally proposes solutions that are little more than revisions of past approaches and techniques.

Even much of the thinking about the so-called emerging church, which, in spite of its theological divergences from orthodox streams, leaves the prevailing assumptions of church and mission intact and simply focuses on the issue of theology and spirituality in a postmodern setting. This amounts to a reworking of the theological “software” while ignoring the “hardware” as well as the “operating system” of the church. In my opinion, this will not be enough to get us through.

As we anxiously gaze into the future and delve back into our history and traditions to retrieve missiological tools from the Christendom toolbox, many of us are left with the sinking feeling that this is simply not going to work. The tools and techniques that fit previous eras of Western history simply don’t seem to work any longer.

After a time of decay comes the turning point. The powerful light that has been banished returns. There is movement, but it is not brought about by force. . . . The movement is natural, arising spontaneously. The old is discarded and the new is introduced. Both measures accord with the time; therefore no harm results. —ancient Chinese saying

What we need now is a new set of tools, and what we might call a new “paradigm”—a new vision of reality: a fundamental change in our thoughts, perceptions, and values, especially as they relate to our view of the church and mission. It isn’t that reaching into our past is not part of the solution. It is. The issue is simply that we generally don’t go back far enough, or rather, that we don’t delve deep enough for our answers.

Every now and again we do get glimpses of an answer, but because of the radical and disturbing nature of its remedy we retreat to the safety of the familiar and the controllable. The real answers, if we have the courage to search for and apply them, are usually more radical than we are normally given to think, and because of this they undermine our sense of place in the world.

The Western church has generally preferred the inherited status quo and has very seldom ventured far from the entrenched ecclesial paradigm. But we are now living in a time when only a solution that goes to the very roots of what it means to be Jesus’s people will do. 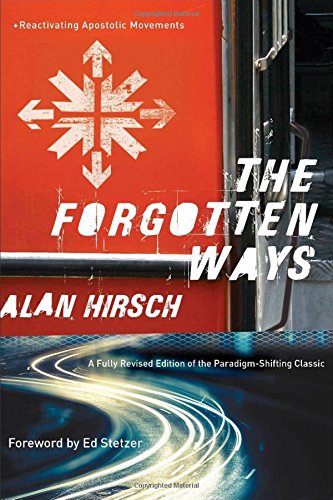 The conditions facing us in the twenty-first century not only pose a threat to our existence; they also present us with an extraordinary opportunity to discover ourselves so that we are oriented to this complex challenge in ways that resonate with an ancient energy lying dormant at the heart of the church— what I will call Apostolic Genius throughout this work.

My new edition of The Forgotten Ways is a book that could be labeled under the somewhat technical and seemingly boring category of missional ecclesiology, or more specifically movemental ecclesiology. It is completely dedicated to identifying, engendering, and activating dynamic missional movements. It has everything to do with being a church shaped by Jesus and his mission.

So don’t be fooled by the drab terminology—movemental/missional ecclesiology is dynamite, mainly because the church (the ecclesia), when true to its real calling, when it is about what God is about, is by far the most potent force for transformational change the world has ever seen. It has been that force before, is that now, and will be that again. The Forgotten Ways is written in the hope that the church in the West can, by the power of the Holy Spirit, yet again arouse and activate that amazing power that lies within us.

Here’s how to download the free 36-page PDF sample: