What is culture?  Before you’re quick to answer that, know that every expert that I’ve studied has at least admitted to there being historical confusion when it comes to pinpointing a definition for the term (my doctoral studies involve me engaging in extensive research over the subject).

I’m actually relieved that the experts are confused, because I’ve personally been ambiguous to the whole matter as well.  Malcolm Gladwell, acclaimed writer, points out that there’s an old yiddish expression that says to a fly in horseradish the whole world is horseradish.

The same could be said of a fish in water, and of each of us as individuals.  Culture is just so much a part of who we are that it’s really the house we live in.  So trying to define culture is like asking the fly to define horseradish.

As people who don’t live in horseradish or water we can describe these two entities quite well, but why?  Don’t dismiss the question so fast, because it’s our ability to answer this question that we can begin to at least thoughtfully engage the culture question.

We can accurately discuss the properties of water, and it’s uniqueness, pointing out its strengths and weaknesses because we have experienced it’s counterpart- land.  To a fly who knows nothing other than horseradish, we can point out its bitter properties, because we’ve experienced other things, sweet things.

In each of these cases, what allows a person to speak intelligently about another person’s culture, is having experienced both their “culture,” along with a different one.  When the fly never ventures out of horseradish, and the fish remains in water, they not only are blinded to the culture of others, they are blinded to themselves.

A recent study reveals that the majority of African-Americans still believe that race is a huge issue in our society, while the majority of whites do not think that race is a significant factor.  I’m not here to affirm or dispute the report, but at the very least, what these findings reveal is the continued chasm that exists between these two ethnicities.

What’s more is that I posted this on my facebook page and the responses were interesting.  Many of the white respondents suggested that race and culture is being made too much of, while many of the blacks said that it’s still an issue.  Ironically, the comments to my facebook status supported the findings of the report.

The difference?  One of horseradish.

Those who confine themselves to their own culture, and never come out to richly taste and engage in others will unfortunately remain completely unaware to life’s not so sweet realities, and in the process will become unaware of themselves.

What’s true for one ethnic group, is true of another.  Too many of the blacks that I know who are of your Public Enemy, rage agaisnt the machine, Malcolm X types, who speak in broad suspicious generalizations of whites don’t have truly authentic white friendships.

While those who have compassion for our white brothers and sisters, have had the bitter edges buffed off of them only by the joyful sweet experience of coming out of their own personal horseradish to do life with whites, and in the process of engagement they’ve not only come to appreciate another culture, but themselves more fully as well.

Culture only has meaning in relation to other cultures.  God understood this profoundly, and that is why Jesus came not to eradicate culture, but to establish a “Master Culture” if you will, called the body of Christ.  This new “Master Culture” does not demolish my human culture, it simply redefines it.

Horseradish should never be eaten by itself, but when a touch of it is applied to such meats as Lamb, now it takes on a whole new meaning.  Likewise, Paul’s sentiments in Galatians 3 when he says that in Christ there is neither Jew nor Gentile, he is not advocating the dismissal of culture, how could he?

After all this was the man who was called to the Gentiles, planted multi-ethnic churches, had one of his disciples submit to the cultural act of bodily circumcision, continue to engage personally in Jewish cultural customs, and boldly proclaimed to the Corinthians that to the Jew he became a Jew.  Any suggestion that Paul was anti-human culture is at best biblically naieve and irresponsible.

What Paul understood is that culture by itself is as meaningless as being served a plate of horseradish for dinner, with nothing else.  Culture only finds meaning when submitted to Jesus Christ, as I take part in the new master race called the body of Christ.  When culture is un-tethered from the cross and made a lone entity, I’ve just committed the sin of idolatry.

Come out of your horseradish. Engage others who look and think different from you, but do so to the glory of God.  Don’t be ashamed of your culture, but don’t revel in it either- let God sanctify and redeem it.  In the process what you’ll discover is a greater affection for Christ, others, and a greater awareness of who He’s created you to be.

The reality is that our nation is trending towards diversity. The church has no option but to maintain the same trajectory, not so much forward, but backward to her first century roots where the normal was ethnic diversity. A failure to do so will put us perilously close to being irrelevant to the changing face of our society. 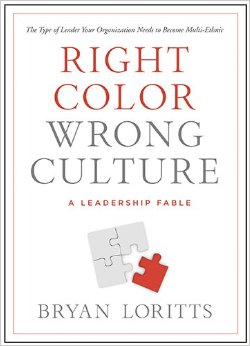 For a more in-depth resource centered around multi-ethnic leadership and ministry, read Right Color, Wrong Culture: The Type of Leader Every Organization Needs To Become Multi-Ethnic by Bryan Loritts.

Increasingly, leaders recognize the beauty and benefit of multi-ethnic organizations and are compelled to hire diverse individuals who will help them reflect a new America.

In this fable of self-discovery and change, Bryan Loritts explores the central, critical problem leaders often encounter when transitioning their church, business or organization to reflect a multi-ethnic reality.